In Which We Eat Paste

Backstory: Every weekday morning, I pack The Boyfriend’s lunch. Also, as referenced in an earlier post, it’s one of my household tasks to plan the weekly dinner menu. To make this a little easier on myself, a few days of the week are always assigned a theme. Relevant to this story: Meatless Mondays (self explanatory) and WABAC* Wednesdays (wherein I choose a main dish recipe from one of my approximately eight gazillion vintage cookbooks).

More Backstory:Â Sometimes life gets in the way of a week’s planned menu. In this case, a previous week’s WABAC Wednesday recipe, “Layered Casserole” from Tofu Cookery, Â©1982. I’d chosen it specifically to use up a large amount of well-intentioned-but-still-unused tofu** that wasn’t getting any fresher sitting in the fridge. Grocery shopping had been completed before schedules changed, so now I also had the recipe-required spinach and mushrooms that needed using in a hurry. How convenient, then, that this particular recipe is also suited to Meatless Monday! I measured, I purÃ©ed, I poured, I baked. It smelled good. It looked good. Everything was going swimmingly.

Still MoreÂ Backstory: When we eat at the dining table, The Boyfriend always waits until the I’m served and seated before taking his first bite. More often than not, however, we eat from trays while watching something on the TV. In those cases, he starts eating while I’m fiddling with the DVD player or streaming device. Such was the case last night, so he was a few silent bites into his portion of Layered Casserole before I had my first taste. My first taste, which resulted in my visceral exclamation of “It’s like paste!” One look over at him and his face indicated that he was in full agreement. I removed our laden plates to the kitchen and ordered Chinese delivery. While watching our evening’s movie and eating our replacement dinner, The Boyfriend leaned over and whispered in my ear, “I’d have eaten the whole thing and not said a word.” That’s love.

Further Backstory: Every weekday morning, our iPhone alarms go off at the same time. We turn them off simultaneously and wordlessly stay in bed a few minutes longer. I’ll shift my leg closer to him, and he’ll move his hand over to mine. A cat or two will wander over and sit on top of us. All silently.

The Actual Story: This morning, our alarms rang. We turned them off. We shifted. A cat came over and sat on top of me. After a moment, The Boyfriend whispered, “Please don’t pack me paste for lunch.”

* TheÂ WABAC MachineÂ refers to a fictional machine from the cartoon segmentÂ Peabody’s Improbable History,Â a recurring feature of the 1960sÂ cartoonÂ seriesÂ The Rocky and Bullwinkle Show.Â The WABAC Machine is aÂ plot deviceÂ used to transport the charactersÂ Mr. PeabodyÂ and ShermanÂ back in timeÂ to visit important events in human history.Â The precise meaning of theÂ acronymÂ WABAC is unknown, but the term is obviously aÂ playÂ on “way back”, as in “way back in time,” and the names of mid-century, large-sized computers that often ended in “AC” (generally for “Automatic Computer” or similar), such asÂ ENIACÂ orÂ UNIVAC. Indeed, according toÂ Gerard Baldwin, one of the show’s directors, the name “WABAC” is a reference to theÂ UNIVAC I.

Don’t You Want Me, Baby?

I just saw the above ad on TV and asked myself, “Is it weird that the chickens are singing a song by Human League?” 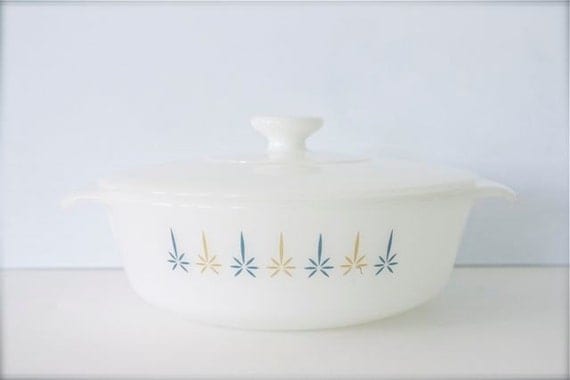 Advertuesday? I think that should be nominated for Worst Portmanteau, 2012. However, what we have here are (vintage) advertisements, and it is Tuesday. The only thing that any of these ads have in common is that they all appear in the May, 1948 issue of Woman’s Home Companion. And that the magazine is too big to fit on my scanner, so rather than scans these are instead hasty photos, complete with uneven lighting and occasional glare. I hope you enjoy the look back! (Click each image to make with the biggering.)

Promise of a lifetime sparkle from Oxydol, 1948. Just what is IN this stuff?

Trade box tops (and a penny) for a Quikut paring knife, from Spic and Span cleanser. 1948.

Skip the dishes! Until you get Dreft dishwashing soap, that is. 1948.

1937 and wouldn’t that pattern make a fabulous dress print?

For those of you not “in the know,” I collect old cookbooks. I frequently read them cover to cover, like a novel. Sometimes, I even cook something out of them. I’m particularly attracted to recipes that use tomatoes in unexpected, perhaps ill-advised ways, as evidenced by the now-classic Ketchup In Dessert experiment. So when my mom bought me a copy of something called Royal Cook Book from 1937 (brought to us by Royal Baking Powder), and then found a recipe inside for Love Apple Cake, well, it was just a matter of how soon I could get into the kitchen!

With the exception of Jell-O booklets, I usually don’t see the same unfortunate recipe repeated in books spanning the years. However, when I found myself at the grocery store knowing that I needed a few things for this recipe but not remembering exactly what, I did a quick online search and found a nearly identical recipe printed in the February 11th, 1935 issue of The Pittsburgh Press. So we can assume that this recipe has some redeeming quality, in order to have survived for at least two years.

An excellent Valentine party dessert, according to the Pittsburgh Press, February 11th, 1935

Now, this is not a (semi-)traditional tomato soup spice cake. This depression-era Love Apple Cake is a three-layer white cake with a tomato filling, and then coated with 7 Minute Frosting. Let’s break this down into segments:

You can use your favorite recipe for white cake (may I suggest this one if you’re baking at altitude) but because I’m recipe testing, I’m using the specific recipe in the book. The caveat here is that the White Cake recipe is proportioned for two 9-inch layers, but the Love Apple Cake instructions say to pour it into three 8-inch layer pans. So okay, the layers will be thin. No problem. Except that the instructions make no adjustment in time or oven temperature! I follow the instructions as written, and wind up with three thin, overcooked (okay, burned) layers. NOTE: The only difference twixt the book recipe and the newspaper recipe is that one calls for granulated sugar, and the other for confectioner’s sugar. Even the time/temp are the same (375° for 25 minutes).

I finally have a double boiler! Yay! More on that in Friday’s post. I can now make 7 Minute Frosting without fumbling around with a bowl set on top of a saucepan. What I don’t have, however, is a hand mixer or egg beater. The Shoes And Pie Test Kitchen is equipped with a stand mixer, a stick blender, and whisks. What do I need an egg beater for? Well, 7 Minute Frosting for one thing. I whisked as hard as I could by hand for 7 minutes to no avail. I even poured the resulting mixture into the stand mixer to see if I could fix it, but wound up with something akin to marshmallow fluff. I should have saved it for future Rice Krispie Treats, but foolishly poured it down the drain (damn!) and started over. I wound up making an Italian Meringue instead. (Note for non-cooks: same ingredients, different cooking method.) Good thing I overbought eggs!

This is the part you’re curious about. The recipe specifies unseasoned tomato juice, but I could find no such thing at the supermarket. Even the low-sodium tomato juice contains added salt so I wound up buying a can of tomato paste (ingredients: tomatoes) and thinning it with water to a juice consistency. Everything else went smoothly, although I’m still a bit perplexed by the instruction to “cook mixture until thick and clear.” Have you ever SEEN tomato juice? It’s not going to magically become translucent. I am going to assume the author means clear of lumps. Maybe. For your use and enjoyment, the Tomato Filling recipe:

Heat tomato juice with lemon rind. Mix cornstarch and sugar and add [to] tomato juice, stirring all the time to prevent lumping. Cook mixture until thick and clear, stirring constantly. [Remove from fire and] Add lemon juice and butter. [Cool before filling cake.]

…wherein any additional information in the newspaper version is shown in brackets.

Overall, it does make for a serviceable cake. It would look even nicer if I decorated it with red candy hearts, as suggested in both versions. The contrast between the white layers and red filling would be more pronounced if my layers hadn’t yellowed from over baking. But how does it taste? Surprisingly good. The cake layers are a bit chewy because they’re, have I mentioned, over baked. I will be making this again, though, so I’ll make adjustments there. The Italian Meringue cooks up even faster than a 7 Minute Frosting, but they’re so close in all respects that the choice is yours to make. The tomato filling is mostly lemon-flavored, due to the zest and lemon juice. My version may be somewhat more tomato-y than intended, because I self-mixed a pretty thick “juice” from the tomato paste. Still, anyone who didn’t know would be probably not be able to guess the extra flavor. You’ll wind up with a bowl full of leftover egg yolks, so try to have something in mind to do with those. I didn’t, and cringed from the waste when I poured them down the drain. Next time, I’ll use them to make a batch of lemon curd. Which is also a delicious cake filling!