Yup, we got our gear together and went camping! It took no fewer than 80 (yes, I counted) email messages during the week leading up to the trip, plus phone, text, IM, and real-life conversations.

Somehow, we all managed to converge on one campground (many thanks to Joe and Megan for taking off work and heading up early to snag two beautiful sites!) and nobody got lost or stuck in traffic. The weather was beautiful, the injuries were minor, the bug bites were only two, and the sunburns were kept to a minimum. We did lose two campers whose dogs were unaccustomed to the cold nighttime temps and had to head home early. Jason dropped his bacon in the dirt. The campfire insisted on periodically becoming a mass of choking, blinding smoke. (My favorite quote of the weekend, from Jason: “I just put my contacts back in. It was like putting campfire IN MY EYES.”)

While Jason and Christine hiked a nearby 14er, the rest of us decided to take a more leisurely stroll. So, 2.5 miles and 1800 vertical feet later (and don’t forget a number of snow-covered paths!) we reached Silver Dollar Lake. The 2.5 miles back to our tents was much easier!

Tossing and turning in “bed” one night, I decided that I was too old and creaky for this shit. Of course, by morning I was already mentally shopping for my new campstove. The next trip won’t be until August, so I have a few weeks to gear up. 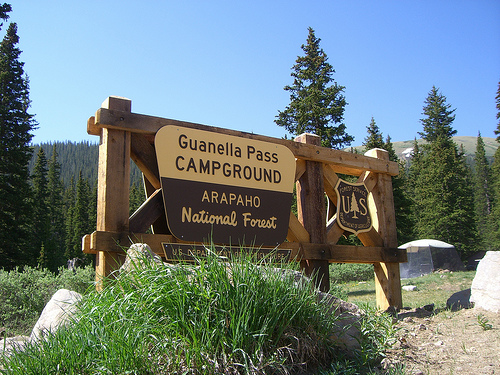