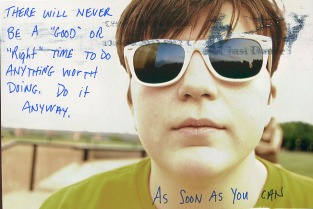 The New Boyfriend* asked if he could move in. I saidâ€¦well, I said quite a lot of things, over the course of a few days/weeks, and none of those things were “yes.” I have concerns. Lots of them. But he heard me, and he has shown discernible effort. Around the same time as this was all under consideration, I found a spare key that I didn’t know I had, and also saw on PostSecret the postcard shown at right, and I figured I should just say “yes.” So I did.

I still have a lot of concerns. Because if there’s one thing I’m good at (there are many, actually, but work with me here) it’s worrying.

When he stopped hinting around and finally came out and asked (or rather, strongly encouraged me to ask himÂ because he didn’t want to invite himself) I pointed out that I’m pretty sure co-habitating usually develops when a couple already spends so many nights at one or the other’s place that they figure it will be easier to drop the commute and bag-packing.Â While he hates to commit to a plan, his life definitely runs on a schedule. A schedule that he does not notice, and denies when it’s pointed out, but come ON. Here’s our schedule-which-he-denies-is-a-schedule: Friday nights at his place. Saturday nights at mine. If he can fit me in, there will be a “bonus” night at my place during the week. Do you see how this might not lend itself toward me thinking “hey, let’s shack up”?

Last night was one of the mid-week nights and twice I woke up because his hand was over my face. He’s already trying to kill me, and we haven’t yet spent more than 3 nights in a row together.

Okay, some of my real concerns:Â He is very tidy, and I amâ€¦decidedly not. I will try to live up to his desire for cleanliness, but look, if I can’t manage to organize for my own sanity, what makes anyone think I’ll suddenly do it for him? We’ll have to develop an equitable division of chores, with the things most irk-y to him on his to-do list.

A plan! A vague but workable plan!

Shoes and Pie Test Kitchen blah blah blah, I have hot-air-popped popcorn for dinner more nights than not. He doesn’t even like popcorn. So I’m going to try this thing wherein I plan meals in advance. Crazy, I know. There are a handful (or more) of sites that specialize in meal planning services, wherein the company takes your dietary needs/preferences into consideration and gives you weekly shopping lists and yadda yadda it all sounds very good. But I’m kind of “into” the retro food thing and that is never an option with these plans, so I’m going to try to wing it myself. And do you see all those WABAC Wednesdays on that there calendar? Time permitting, those should turn into some enlightening Thursday blog posts. I’m counting on leftovers or the occasional dinner out for all those days left blank.

Another worry: I love to visit Europe. Which sounds fancy, but it’s not as though I go at the drop of a hat (I wish!). However, I have managed to travel overseas on four (edited: five. At least.) separate occasions. He, on the other hand, has never had a passport. Five generations of his family have all lived within 100 miles of Denver, while I now live 1,800 miles from my own birthplace, let alone that of my parents/grandparents/great-grandparents. I grew up with NYC in my backyard, and he thinks Denver is too busy. None of this is really a concern, as he’s a willing sponge who likes to explore and learn. The problem is that he doesn’t know what he’s missing, so he doesn’t ache to return to New York-London-Paris-Munich the way I do. I’d settle for a trip to a resort in Mexico, where I’ve never been (but he has, so there’s that). Also: all of his vacation days are saved for racing and race-related events.

Which brings me to another thing: everyone thinks it’s so cute/amusing/funny to say that drag racing is his number-one priority. Except that itÂ is. It really, truly is. I get a bang out of how much he enjoys it, and I’m happy that he is both co-driver of the #1 carÂ andÂ crew chief of the #2 car for the 2012 season. But running two diggers takes twice as much time as running one (which takes a lot of his time as it is), and I’m so very tired of fighting the dragsters for his attention. Tired? Hell, exhausted.Â Fed up. I do not see a long-term solution to this. Which in no way segues to:

We took some time over the weekend to look around his place and try to figure out where everything will fit into my place. He doesn’t collect “stuff” the way I do, so there isn’t too much that will have to be jammed in, but there are a couple of large-scale items (vintage pinball machine, vintage cigarette vending machine) that really should go in my basement tiki bar except that the tiki bar has been completely overrun by photo studio equipment for the shop, and there is NO MORE ROOM. Consider this an open call for home organizers who will work in trade for fabulous Jell-O salads. Or photographers who will work for same. Or cookies. Or pies.

Oh yeah, and that whole “my place” thing? Mine has been the only name on my lease and/or mortgage for almost 13 years now. There have been a few short-term roomies in there (hi, Scott! We still need to make a phá»ŸÂ date), but they were my tenants. This is not the same kind of relationship. I’m going to have to try to remember that this will be our place, not my place. If anyone has recommendations for helping that work, please do share.

Upon hearing of our plans, my mother asked if we were getting married. Not that she feels marriage is a moral requirement for living together, but to be “kept in the loop.” Now, given the topic of conversation, wouldn’t you think that if we were engaged, I’d have mentioned it? Or, seeing as I hadn’t, that there was aÂ reasonÂ I hadn’t and asking me was therefore putting me in an uncomfortable situation? (We are NOT engaged.)

BUTâ€¦I don’t want to be a girlfriend forever. The word “wife” kinda flips me out, but this whole being-single-forever thing is wearing on me. SoÂ if we can make this work and get along, I want a ring, dammit. He, on the other hand, is quite vocally against marriage. Between anyone. He is of the very firm belief that approximately 95% of all marriages fail, so why bother in the first place? Most of the marriages in my immediate family have ended in divorce, so it’s difficult for me to argue. And yet, in spite of it all, I do believe in marriage. I can’t rationally explain why, but I promise it is more than simply my desire to do something useful with my grandmother’s diamond, and an excuse for an elaborate cake. But then again, you know, cake.

So it is with no small amount of trepidation that Â ahem, we enter into this arrangement. And I hope that he doesn’t smother me in my sleep.

*We’ve been dating for what, a year and a half? He shall apparently be known as The New Boyfriend until such time as his status is no longer “boyfriend” for whatever reason.