The last time I saw my cousin and his wife may very well have been at their wedding. Seven years later, for a funeral of sorts. And that’s just crazy. I love my cousin. I even like New Jersey. Most of the trouble is the flights… four hours to get there, a two hour time shift… Day One is blown from the get-go. Day Last is similar. So four days is kind of the minimum. But then… I want to see my sister. My cousin. My uncle and grandmother. Manhattan. Ikea. Now I’m spending a week couch-surfing through New Jersey, and hello? That is NOT a relaxing vacation.

My last trip to NJ, in October, was spent in Brigantine, near Atlantic City. Lovely, but not “home.” My cousin lives near Sussex, which is about an hour northwest from where I grew up. Geologically and topographically, though, it looks a lot like home. Rolling hills, rock outcroppings, canopies of trees. Considerably more wild turkeys running through the yard than I remember, though. :) 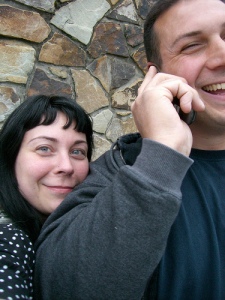 5 responses to “Weddings and funerals”